Archive for the Latest Blogs Category

The Day of the Nissan Qashqai

The Day of the Nissan Qashqai, We don’t see a Qashqai for weeks then two in one day and they are both white.

Although at first glance they look the same vehicle they actually have one big difference, one is a seven seater and the other is a five seater. The Qashqai + 2 is a seven seater slightly longer version of the Qashqai which means an increase of 3 psi of pressure to the rear tyres.

The first Qashqai + 2 had a repair to the inside of the tyre that I hadn’t seen before (correct me if I’m wrong) I believe that as the tyre was a V rated (148mph) tyre that its to high of speed rating to have a repair of this type, with my limited knowledge of major repairs I think the wrong type of non reinforced patch had also been fitted and looks a lot larger then I have previously seen before.

The second Qashqai had a nail in the edge of the tread of the tyre to close to the edge to perform a minor repair which we carry out on site, some tyres with certain speed ratings can be major repaired by sending them off to a company which takes about a week, this is a service we don’t offer and with the increased speed ratings as standard on cars these days it would only be a very small amount of tyres that could be repaired in this way and with a week turn around what would the cars without a spare tyre do?

Where is the Summer? Wymondham railway bridge near the station pumped out.

Where is the Summer? Wymondham railway bridge near the station pumped out.

Just when we thought the summer weather was upon us we get a big down pour of rain, this can cause havoc with our journey times as our technician found out the other day while heading to fit some tyres in Wymondham.

When he got to the railway bridge in Wymondham he found the fire service there pumping water from underneath the bridge and from the distance it look like a car had suffered water damage by attempting to pass through the deep water.

Mr Cycle found us by spotting our new roundabout sign on the Ayton Rd roundabout, He continued with his work while we came to his home and fitted him two new front tyres.

Our new Online Ordering system makes it super easy to order your tyres and make the booking without even phoning up and if you order online you will save even more money with our £10 off Two Tyres – £25 off Four Tyres – Online Exclusive Multibuy Offer, After the order is placed you will receive a confirmation email to confirm your tyres have been ordered and the job has been booked in at the time and date that you picked.

Paying couldn’t be simpler with our mobile chip and pin machine or we also accept cash, unfortunately we no longer accept Personal cheques. 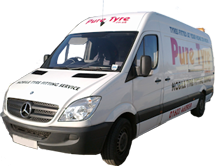 We have detected that you are using extensions to block ads

To view this page and to help keep these pages up to date, please disable your ad blocker.